How can you meet people on a flight and feel as if you have known them for years?   Indeed my connection with the Adairs was instant and special.  I learned that Pat, originally from Guyana, had family in Barbados and that James was originally from Atlanta, GA.  They were traveling to Barbados for a funeral, but we were quick to swap stories about our lives during our flight.

James asked me to find a picture of myself.  I found a phone photo, showed him, and continued to chat with Pat. (Heaven forbid there should be a lapse in conversation.)  Within 5 minutes, James had a signed sketch of me on a bag.  I smiled and asked if he was an artist.  I smiled even more when they both shared a part of his art bio. James formally taught at Morris Brown College, but had been a fine arts painter for over 50 years.  He is renown for his portraits, “but I do abstracts and mixed media too,” noted James.  He indicated his work has been widely exhibited.  From his website:

Influenced by social realism and intellectualism of numerous artists, including Romare Bearden, Henry O. Tanner, and Hale Woodruff, drawing and painting are as natural to him as water that shoots up from a spring.  Abstract Expressionism has played prominently, allowing him to develop a way of expressing his own philosophy of color, and what he calls “mind expression.”  Color became evolutionary for his works. Beginning in the 1950’s his color narrative has expanded with the passing of each decade.  A product of the Atlanta Public Schools, Adair was introduced to the Fine Art of painting, drawing, and portraiture by one of his teachers, Mrs. Beatrice Stafford, who encouraged him to explore and appreciate art at its highest level.  He attended Morehouse College and graduated from Fort Valley State College (University), in Georgia., with a B.A. in Education.  Additional studies in fine arts, at Georgia State College (University) and the Atlanta College of Art further burnished his natural abilities allowing him to continue to grow and expand throughout his career. 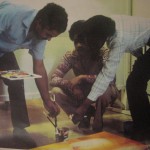 In 1963, he was t first African-American artist to open a gallery in downtown Atlanta during the height of the Civil Rights Movement.  He then went on to a career in art education, teaching at the college, high school, and middle school levels for 30 years.  During that time, he maintained his interest and love of art through his paintings, and as a commissioned portraitist.  Several of his portraits are prominently displayed in public places including the Georgia State Capitol; City Hall, Atlanta; Friendship Baptist Church, Atlanta; and Ralph Bunche Middle School, Atlanta.  He has also participated in group and solo exhibitions nationally and internationally

James and Pat have two accomplished children, a Son-in-law, and two  grandsons,  and while they travel, James paints in his home studio.  I discovered that Pat loves editing and although she also writes, she said she prefers to journal and edit.  I asked her to contribute to Garden Spices, and while it may take some time for her to consider writing for us, James consented to allow me to include some of his work in this issue: Vicki with James and Pat Adair

By the time I left the Adairs, I felt we had made a memorable connection – one that would span beyond these pages.

Goin’ In: Project Say Something

Project Say Something Garden Spices Magazine has been a fan of this ebbing organization in Florence, AL.  And now,  we invite you to learn about their intentions and their work. Project Say Something’s Mission is to unify, educate, heal, and empower communities in the mid south to realize…